Max and His Home Heroes

Recently widowed, Max is a ninety-two-year-old Korean War veteran who receives both caregiving and nursing services through Firefly Home Care and Firefly Home Health. His caregiver, Rita, and his nurse, Cindy, work with Max to help him stay healthy so he can continue to live in the home that he loves. 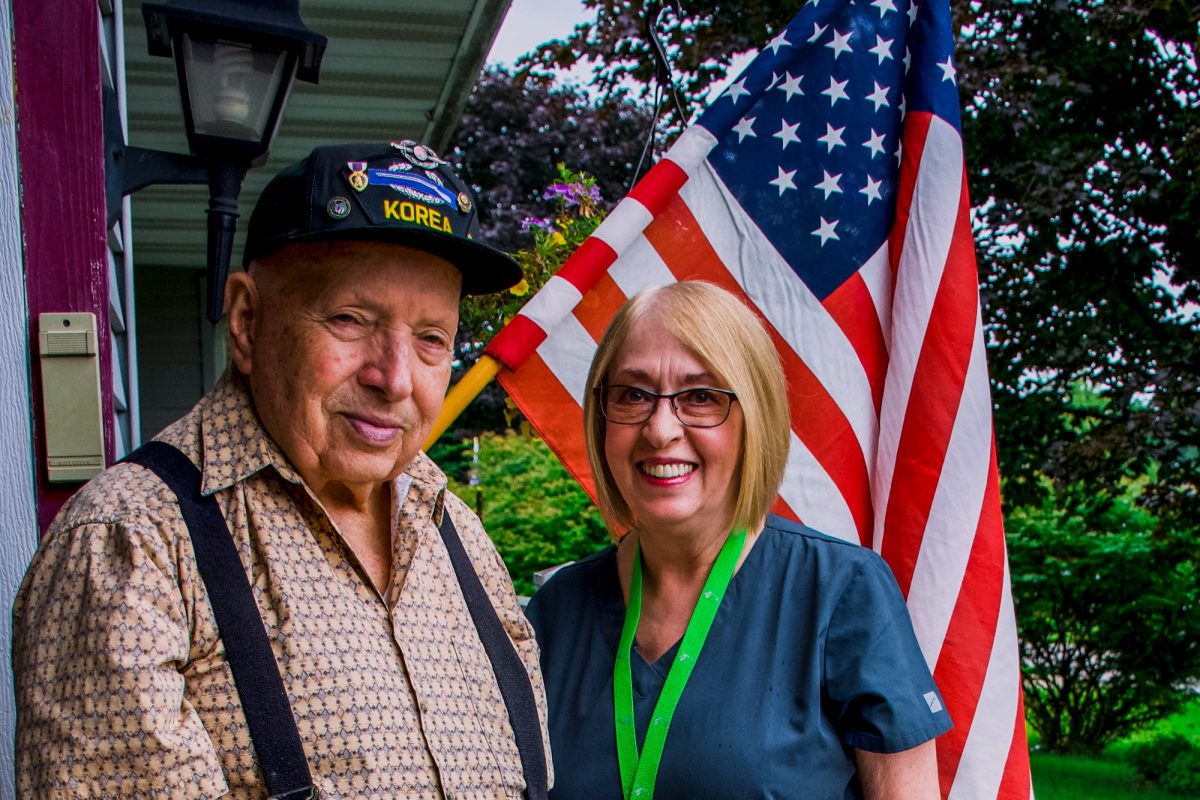 Max has lived most of his life in northern Indiana. Born in Noble County, Indiana, he graduated from Wawaka High School in 1946. Max grew up during the Great Depression in a family with multiple military members. His father served in World War I and his three older brothers served in World War II. Max was drafted during the Korean War. He spent much of his enlistment state-side. But then he was sent to Korea, where he spent several months in an area called Pork Chop Hill. A fierce battle took place in March 1953 and it was here that Max was injured. He was air-lifted to a hospital in Japan where he spent months recovering from his injuries. Shrapnel had paralyzed his left arm. After many months of therapy, he regained the use of his arm, although to this day he notices it is weaker than his right arm. Max, ever a humble man, counts his blessings every day—he was one of the lucky ones to survive the intense battles that took place on Pork Chop Hill.

When he returned home from the war, Max joined his wife, Evelyn, and young son in Elkhart. Over the years, they had three more children—a daughter and two sons. Following an apprenticeship in tool and die making, Max worked in a couple of machine shops before getting a job at Miles Laboratories where he enjoyed a thirty-four-year career.

After he retired, Max and his second wife, Barbara, whom he met at Miles, enjoyed traveling. He fondly recalls a two-month trip they took traveling the western United States. They had a wonderful time driving from place to place seeing this beautiful country.

Ten years into his retirement, Max experienced vision problems. It started with his right eye, then included his left eye. Now, he’s not able to see his hand if held directly in front of his face. He has some peripheral vision and relies on that to get around in his house. His wife Barbara passed away about a year ago, but even before she passed away, they needed help around the house.

As a veteran, Max receives healthcare benefits through the VA. In addition to receiving medical care at the VA, Max receives caregiving and nursing services at his home from Firefly Home Care and Firefly Home Health. In the years he’s received help, Max has enjoyed the company of every one of his caregivers. Most recently, his caregiver, Rita, has been coming daily. “She’s a blessing for me,” he said. “She cooks lunch for me and cleans my house like it was her own. She comes every weekday and takes me to the grocery store and the credit union because I’m not able to drive.”

To hear Max tell it, Rita and Cindy, his nurse from Firefly Home Health, are angels and he’s thankful for their help. Without their help, Max might not be able to continue living in the home he shared with his wife for many years. Max points out family pictures that he can no longer see well, but he knows they are there. Large pictures of two beloved dogs, now gone, line the hallway. The decorative plates that his wife collected adorn the walls of the eating area. From his chair in the living room, Max can see when birds come to eat the birdseed his caregiver Rita puts just outside the window. He can see them out of the corner of his eye and takes great delight when they come for a visit. All these things and more give Max comfort. He knows where everything is and mostly, he can get by on his own, with a little help. That’s where Rita and Cindy come in.

Rita sees Max five days a week for a couple hours each day. During that time, she takes Max to the grocery store or credit union, fixes a meal for him, guides him through exercises so he can stay strong and healthy, and cleans his house. “Rita, does an amazing job keeping my house clean,” said Max. “She cleans it as if it were her own home.”

What Rita does for Max is much more than running errands with him and cleaning his home. They talk, exercise, and sing hymns together. One time, Rita helped Max hang his American flag, and they stood by the street and recited the Pledge of Allegiance.

His home healthcare nurse, Cindy, sees Max once a week. She checks his vitals and medications and monitors the swelling in his legs. “Because of Max’s visual challenges, he listens intently. He follows the news and listens to books on tape. When I see Max, we talk about things that are going on. He’s very social and has a great sense of humor—he interjects funny thoughts and comments about what he’s heard. It’s a pleasure to care for him,” Cindy said.

Rita and Cindy have different roles in Max’s life. They are an important part of Max’s network to keep him healthy. Between his family and doctors, Rita and Cindy see him regularly and can identify if there are health changes in Max. They are both in tune with Max’s needs. As Cindy said, “A lot of our job is listening to the client so we can pick up on any problems. If someone didn’t sleep well, we ask questions to see if there is any way we can help.” From Max’s perspective, he’s thankful these two home heroes are part of his daily life. He looks forward to their visits, and aside from all they do for him, he enjoys their company. He has a lot to say, and they lend a friendly ear, share stories, and do the activities that are important to Max—like raising the flag and saying the Pledge of Allegiance. These things are important to Max and Rita and Cindy are heroes in Max’s eyes. 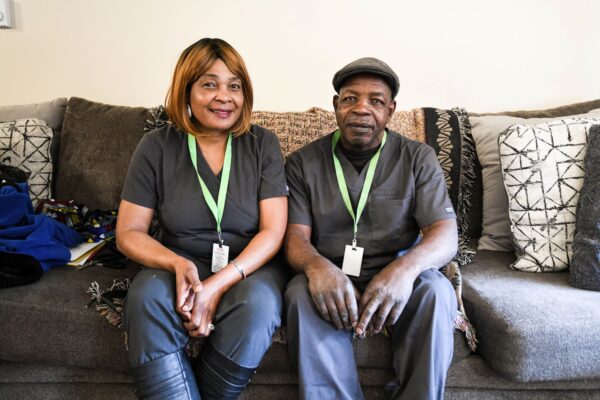 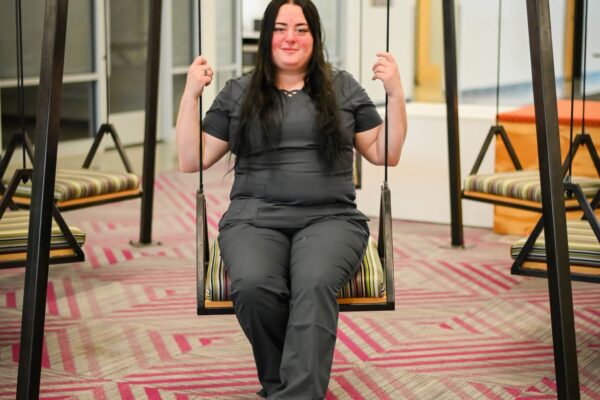 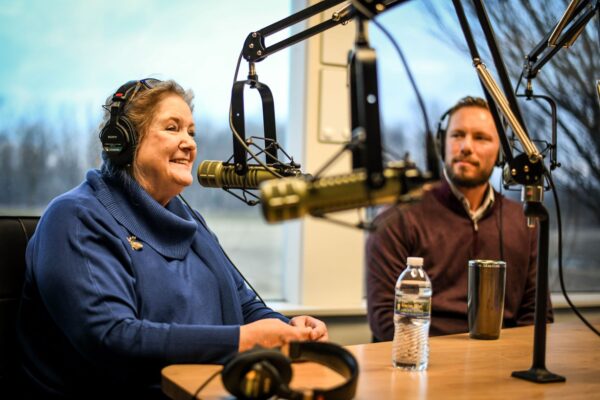 Links
Locations
Services
Social Media
We use cookies to ensure that we give you the best experience on our website. If you continue to use this site we will assume that you are happy with it.I agree